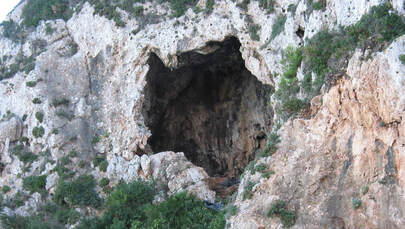 Entrance to the Cova Foradada
The pre-historic periods known as the Palaeolithic, Epipalaeolithic and Neolithic eras started when the first ancestors of modern man appeared on the African steppes approximately 3.5 million years ago, continuing until about 5000 years ago. This long period, commonly known as the Stone Ages, covers more than 99.8% of human history.

Humans learned to knap (chip) flint stone and make tools for scraping, poking holes, grinding, cutting and crushing food. They also learned how to use fire and perfected hunting techniques by developing an understanding of how herds moved and how to select prey. These hunter/gatherer activities arose from a deep knowledge of nature, maintaining a balanced ecology and therefore a sustainable system. At the same time, humans developed artistic and "spiritual" capabilities, which resulted in the first artistic and religious expressions.

Unfortunately there are very few remains from this period. This is understandable when you realise that most things were made of perishable materials such as wood. The only items surviving to the present day are exclusively of bone, stone and antler.

The oldest relics of human occupation in Xàbia and its surroundings were found in the Cova Foradada (perforated cave) where a small group of hunters settled 30,000 years ago (the Early Upper Palaeolithic period). Artefacts from slightly later times have been discovered in the Cova del Montgó (Montgó Cave) and the Cova del Moro in Benitatxell.

In those days, during the last Ice Age, the landscape of the region was very different from today. The polar ice cap expanded, trapping seawater as ice and causing a fall in the sea level. Thus more land was exposed and the shoreline was several kilometres further out to sea than it is today.
Around 10,000 BC major climate changes caused the Arctic ice cap to retreat and the landscape and climate became similar to today. There were substantial changes in both wildlife and vegetation and humans had to adapt to these changes.
​
Thus began the Epipalaeolithic period – the last stage of the hunter/gatherer societies. This period is characterised by microlithics i.e. stone tools made of very small pieces of flint. Evidence of small outdoor camps from this period has been found in the Cap de la Nau and la Plana de Sant Antoni.

​The Neolithic culture made substantial changes to the life and work of human communities. It introduced the domestication of plants and animals enabling the emergence of agriculture and animal husbandry. These changes, which are fundamental to the history of human beings and their relationship with nature, originated in the Middle East in the 8th millennium BC. From there they gradually moved westwards, eventually reaching the Mediterranean coast of Spain in the 5th millennium BC. Significant technological advances accompanied these changes, most notably the development of pottery and stone polishing techniques.

​The Cova del Montgó was an important Neolithic settlement and abundant relics of the various stages of this period have been found there. These include handmade ceramics with decorations made by pressing cockle shells into the wet clay (known as Cardial decorations), moulding, cutting and painting. There are also axes and adzes of polished stone and other materials. The Cova de l'Or at Cap Negre was also occupied at this time and some archaeological materials have been found there.