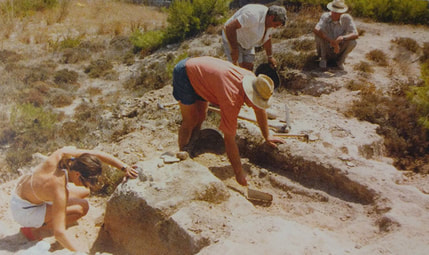 1985 excavation (click to enlarge)
The Muntanyar necropolis is a large area of burial sites linked to the nearby Roman settlement on the Punta de l‘Arenal.

The existence in this area of burial sites excavated in the rock has been known for a very long time, as the Muntanyar was used as a quarry to cut blocks of the local porous sandstone known as tosca. Indeed, many of the graves, including skeletal remains and grave goods, were destroyed by the stone cutters or "tosqueros".

Although several archaeological excavations were made in the 1930s, it was not until 1985 that the first scientific excavations were undertaken, and they continued later, in 1989, 2001 and 2005. A total of 83 graves were discovered, though in many cases they did not contain buried remains.

Nearly all the known tombs on the Muntanyar sites are graves excavated in the rock, mostly with either east-west or north-south orientation. The graves are generally trapezoid in shape, normally with rounded ends, being widest at the extremity which coincided with the upper body.

The funeral ritual was always burial, placing the corpse in a supine position within the pit. In some cases, shrouding of the corpses has been documented. It was normal to reutilise the graves for multiple burials – up to four bodies were found in one grave in the excavations of 1985.

Of the 83 tombs discovered in the necropolis, only eight contained grave goods or other items to accompany the deceased. In general these materials are of little importance. The most notable are a glass oil vial, a possible bronze censer (incense burner) and pieces of jewellery - such as a bracelet and a ring, also in bronze - and a bead collar made of "pasta vítrea" (opaque coloured glass) discovered in the last excavation.
​
The Muntanyar was the main necropolis for the settlement of the Punta de l’Arenal, comprising about 900 graves within an area of approximately 6,000 sq m. Its extensive chronology spans some 600 years, between the 1st and 7th centuries AD.