THE END OF THE ROMAN EMPIRE - THE ATZÚBIA ARCHAEOLOGICAL SITE 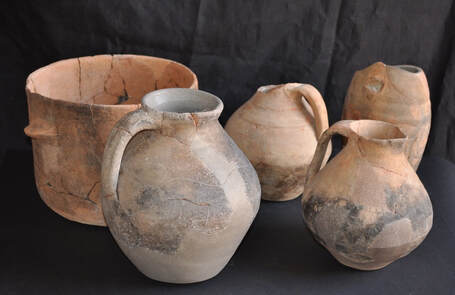 Between March and April 2015 and subsequently between November and February an archaeological salvage excavation was conducted at the Atzúbia site which is located at the southeast end of the Xàbia valley plain (Pla), next to the Cansalades road which leads to Benitatxell. The dig was led by Pasqual Costa. This work, carried out on a plot owned by José Company Reig was financially supported by the Company family. Thanks to their efforts the documentation and recovery of important remains has been made possible. The findings shed light on one of the lesser-known periods of Xàbia and the Marina Alta.

The archaeological studies documented two old lime kilns (17th-18th centuries) as well as remains from the Al-Andalus period (11th – 13th centuries) and seventeen grain silos dating from the Roman and late antiquity periods (from the end of the Roman Empire until the arrival of the Muslims in the 8th century). These silos, excavated in the natural geological substrate, had fallen into disuse and had been reused as landfills and dumps in the seventh century AD.

One of these structures (Number U.E. 19), was circular with a diameter of 160cm and a maximunm preserved depth of 70cm. It was full of dark soil, stones, many snail shells (mostly terrestrial, but some marine) and fragments of pottery. The residual presence of a fragment of north-African ceramic (of the type T.S.A. D,Hayes 107) and a collection of broken, but almost complete ceramic vessels enables us to date the collection to the middle of the 7th century AD. Three of these silos also served as burial places for five individuals, who had probably been social outcasts from the community.

The characteristics and location of this settlement allows it to be interpreted as a small farming enterprise carried out be people who, at least towards the end of their occupation, balanced their diet with the consumption of land snails and to a lesser extent, marine mollusks.

The most important thing about this site is that it is the last known human occupation from Late Antiquity known to date. These people continued their Roman heritage with a collection of ceramics basically intended for cooking and household use, displaying a range which we can consider as a precursor to the later forms of pottery of the Moslem conquest (13th-14th centuries).
​
The scarcity of information about this period of history, and the uniqueness of the vessels found in the excavation have led to the restoration of this collection of ceramics. The restoration work was carried out by Maite Gay Arenas.