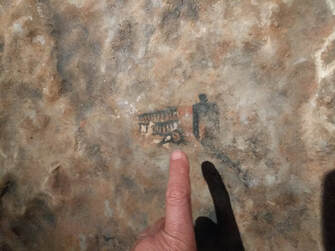 Copy of Panel 1 - Cova del Migdía. Possibly an idol.
The most important examples of prehistoric art in Xàbia are in a cave in the Migdia ravine (Cova del Migdía) located on the cliffs of the southern slopes of the Montgó mountain at an altitude of about 375 metres above sea level. It was discovered by chance in 1989 when members of the Gata Caving Group were training there.
​
The cave entrance is towards the east, about 10 metres above the slopes of the foot of the mountain, from here a narrow gallery runs west for some 25 metres, ending in the cave where the paintings were found. This spacious chamber, open to the outside, is about 7 metres wide, with a maximum height of 4 metres.

The group of paintings has been divided into 10 panels with different motifs and varied states of preservation. These Migdia paintings belong to the style known as ‘Schematic Art’ in which only the basic elements of each figure are represented. This style is relatively common in the Marina Alta and covers a period of nearly 4000 years, between the 5th and the 1st millennia BC.

Most of the designs in the Migdia cave were painted in an intense black while a rather faded red was used only for parallel lines and odd spots which are difficult to interpret.

There are all sorts of motifs: fingerings, bars, dots, triangles, diamonds, wavy lines, zig-zags, star shapes, pectiniforms (comb like), zoomorphic (animal-like) and anthropomorphic (human-like) shapes, and others which are more challenging to define. In some cases, the motifs appear to form groups which need to be interpreted together. Accordingly, the group on the north wall, including an anthropomorphic figure, possibly an idol with eyes, seems to represent a scene from a cult with religious, probably funereal, significance.

Another interesting motif is a globular shape like a bag or net, and flat on top. A cross and other marks nearby appear to be part of this group. The similarities of the group to a net or trap, or maybe even a hive, fits in with the location of the painting, which is in a hole in the ceiling of the cave. Some people have seen this shape as an idol with eyes, with parallels in portable art. Other scenes are easier to interpret, such as the herd of four-footed running animals.

The cave was also a burial chamber. There were at least three burials here (two adults and one child) and each had grave goods buried with them: a vessel of handmade pottery, a small blade and an arrowhead, both of flint. These remains allow us to date the burials to the 2nd half of the 3rd millennium BC.

​There are other archaeological sites in Xàbia which contain remnants of wall paintings, but these are less important and very poorly preserved. One such is the Abric del Pastor (Shepherd's shelter) on the Montgó, where there are several spots and some traces of red paint. Remains of red paintings in the "Schematic" style have also been found in the upper and lower Coves Santes (Holy Caves) on the Cap de Sant Antoni.