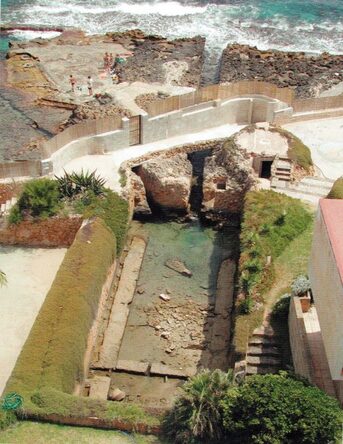 The existence of an ancient and important archaeological site at the Punta de l'Arenal has been known since at least the 18th century AD. In 1963 the construction of a house on the site enabled the discovery of a range of structures, as well as an important collection of architectural materials and ceramics. These findings encouraged the start of a study and excavation of the whole site in 1964, directed by Gabriela Martin and Ma. Dolores Serres

One of the most important elements preserved is the great pool or hatchery known as the "Banys de la Reina” or “Queen’s Baths". This structure, excavated in the tosca "fossilised sandstone", is connected to the sea by two channels through which the sea water that fills the pool enters and circulates. It is rectangular being 27.30 m long, 6.85 m. wide with an approximate depth of 3.50 m. The presence of this hatchery made the excavation directors believe that the site was a fish factory where salted fish was prepared.

The latest research (M.Olcina, 2004) interprets the Punta de l’Arenal complex as a luxurious seaside villa, with the pool/nursery supplying fresh fish and seafood to its rich owners. The magnificent set of architectural remains from this villae (rural Roman settlement) belong to the residential buildings of the site, one of the most important in the Valencian region.

​The Roman settlement of Punta de l'Arenal was occupied for more than 600 years (late 1st century BC to early 7th century AD). During that long period the site went through various stages. During the first stage between the late 1st century BC and the middle of the 2nd century AD, the site underwent major restructuring, including the destruction and re-utilisation of its luxurious architectural elements. From that moment on, the life of the settlement appears to have developed continuously until the second half of the 6th century or the beginning of the 7th AD.