A burial consisting of bones from several different individuals. Cova del Barranc del Migdía
By the end of the 3rd and start of the 2nd millennium BC, the deep changes brought about by the Neolithic age were fully established in this area. Agriculture and animal husbandry had become the basic activities. Settlements were generally on flat areas, while some cave dwelling continued. However, the main use of caves was as communal burial places for individuals belonging to or related to a particular group. The first copper tools were made at this time, marking the introduction of new metalworking technologies which would later be fully developed during the Bronze Age.

In Xàbia, archaeological remains dating from this period have been found in the Cova del Montgó, which was also used as a burial place. There are also remnants of a burial in the Cova de la Rabosa, and in other settlements on the wide, sunny side of the Montgó. However, the most important archaeological site is the Cova del Barranc del Migdía (Cave of the Midday ravine)  which contains several group burials and numerous cave paintings.
BRONZE AGE 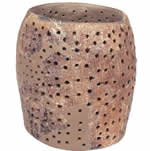 This started around 1,900-1,800 BC and continued until 800 BC.  Changes which had been initiated in the Chalcolithic (Copper Age) became more profound. Many hill and mountain top settlements appeared while cave dwelling gradually diminished. Houses were made of stone and covered with branches and mud and the first villages appeared. These early urban developments and their location indicate that the people were concerned about defence, or at least with territorial control.
​
The economy of these societies was centred on agriculture and livestock. This is shown by the discovery in many sites of "molinos barquiformes" (grain grinding stones), "dientes de hoz” (teeth of a sickle) which are pieces of worked flint mounted on a wooden structure making a type of sickle used for reaping. Less frequently "queseras" were also found. These are ceramic pots with small holes in them for making cheese. These artefacts (displayed in Case 2) clearly reveal the importance of grain cultivation and livestock.
​
Archaeology also provides evidence for other complementary activities such as hunting, fishing, textile weaving (as indicated by loom weights), basket-making and metalworking. The latter is evidenced by finds from an important settlement at Cap Prim where a sandstone mould for making small rectangular chisels was found together with bronze slag and fragments of tools such as saws and punches.

Evidence of Bronze Age culture consists of a rich and varied set of artefacts made from polished stone, bone and shell pieces and many fragments of undecorated hand-made ceramics. Burials in caves and crevices continued, though now there were only one or a few individuals and fewer grave goods. The two pieces of bronze (a dagger and an axe), discovered at the beginning of the century in the small cave of the Pou dels Frares, in Cap Marti probably belonged to one such grave.

​This long phase of history was inevitably affected by outside influences, especially during the Late and Final Bronze Ages and are evidenced in the settlements of Tossal de Santa Llucia and Cap Prim.