The Iberian settlement on the Plana Justa 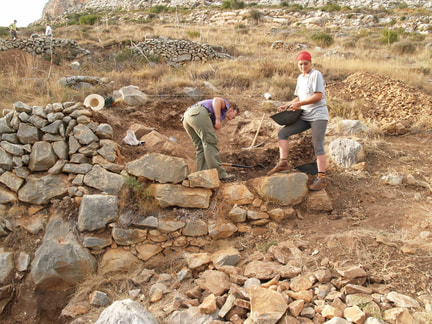 The Iberian settlement on the Plana Justa, discovered by the museum in 2000 AD, covers a large south-east facing slope under the "cap gros" (literally "big head" - main mass) of the Montgó. Situated at an altitude of around 250m, it has an area of 35,000 sq.m. In 1916 the area was terraced as part of the "Colonia Agrícola del Montgó" (Montgó Agricultural Colony).

Archaeological surveys in 2006 showed that agricultural development and erosion had changed and destroyed a great part of the site so that few complete structures were found. Only the remains of some walls were discovered and in one example this had been reused for modern terracing. All the walls are built directly on the natural rock, with outside walls of medium-sized, rectangular, narrow limestone blocks and others of smaller stones bound together with soil.

The archaeological remains recovered are ceramics of similar types. The handmade ceramics are of importance but they are very few and in fragments, making them impossible to classify. The rest of the material, pottery thrown on a wheel, divides into imported material and Iberian ceramics.

In the first group are Phoenician amphoras from the end of the 7th century BC and the beginning of 6th century BC, together with Greek goblets with a black glaze from 5th century BC. The Iberian ceramics are in the style of the 6th and the whole of the 5th centuries BC, already familiar from other sites. They include amphoras, jugs, plates, bowls and urns with "orjetas" (literally "ears" - solid or ring handles either side), some decorated and some of grey ceramics, such as dishes or jugs. In addition, kitchen ceramics made on a wheel were found.

This means that chronologically there were two large groups. In the first are Phoenician imports and imitations of these products, including the handmade ceramics. The second comprises the group of finer clays and higher firings, as well as the grey ceramics, whose production methods date from the end of 6th century BC to the whole of the 5th century BC. In this is included the imported Greek black glazed items.

These two large chronological groups were found mixed in the excavated levels, which we presume is related to the abandonment of the site, dated about the end of the 5th Century BC.
​
Also found were fragments of sandstone from domestic mills - circular or conical grinders - and among the metal materials, some tweezers of bronze (in Case 4) and fragments of iron slag are of interest.

The Iberian Treasure of Xàbia 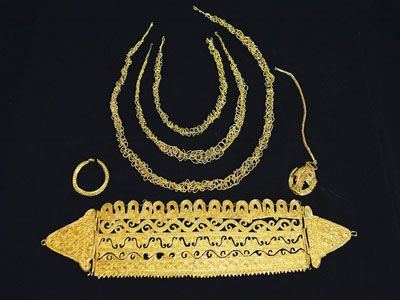 In 1904, a collection of gold and silver jewellery was discovered on the estate of landowner Torres Orduña in the Lluca area. The items were inside a ceramic vessel found at a depth of around 50 cm by a workman excavating the land. The discovery is now known as the Treasure of Xàbia.

Eventually the Treasure was purchased by the State and deposited in the National Archaeological Museum in Madrid and a replica is displayed here.

The collection consists of six pieces in gold – a diadem weighing about 133.6 gm, a brooch or pendant, a bracelet of plaited chain and three necklaces of loosely plaited gold. The less important silver pieces include a serpent-like bracelet, three undecorated belts and fragments of several more belts.

Study of the gold items, especially the diadem, indicates the Treasure to be of Iberian manufacture with Tartessian influences (Greek colonies near Cádiz), using techniques developed in Greece.

The chronology and origin of the Treasure has been much discussed. Currently its technical characteristics date it to the early 4th century BC.

The collection of jewellery, together with the Treasure of the Montgò and the Treasure of the Penya de l’Aguila, discovered more recently in 1999, was probably hidden in a time of instability. However they are clear indicators of the importance of this area during the Iberian period.