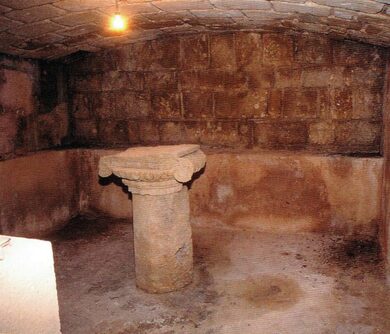 The collection of architectural remains found at the Roman "villae" (rural settlement) site of the Punta del Arenal is one of the largest found the Valencian community.

To date a total of 12 capitals (stones on tops of pillars) are known from the site. Ten are of the simple, Tuscan style, while the other two are much better made, with a richer decoration corresponding to the Ionic order. These two capitals were the only ones found resting on octagonal columns.
​​
There are 15 known column bases. Eight have a plinth with two convex (torus) mouldings separated by a concave (scotia) indentation. The rest, without plinths, show a pattern similar to the above. Only one has the preserved remains of a decoration with grooves that would have continued up a shaft, which has not been found. Most of these pieces are preserved in the gardens of the house which occupies the site, except for four bases (property of the Albi family) and a capital (property of the Lambert family).

Other architectural pieces of decorative value from the site are stored in this Museum, a highlight of which is the tosca stone arch of the Segarra-Llamas collection. This is very well preserved with remnants of the original covering of white lime paint. This piece would have been part of the top of an architectural structure on the headland or perhaps from a funerial memorial on the Muntanyar.

Other stone components have been found along with these pieces, including column shafts, blocks and other indistinct building elements and two rectangular "sarcophagi". In addition, four more or less rectangular large blocks of limestone have been found with marks that suggest their use as parts of a beam press for wine or oil.

Except for these items, which were made of "piedra viva" (a particularly hard limestone) because of the function that they had to carry out, the rest of the architectural pieces were of tosca stone which has been used in Xàbia architecture for 2,000 years. In some cases these remains still retain patches of lime plaster and/or white paint.

We assume therefore that these great capitals, bases and column shafts would originally have been coated in lime and/or painted, in most cases in white, but also perhaps in red ochre, ochre, green or blue - colours that were used in the Punta de l'Arenal to decorate the walls of some of the rooms in the villa.