THE ROMAN SETTLEMENTS OF XÀBIA 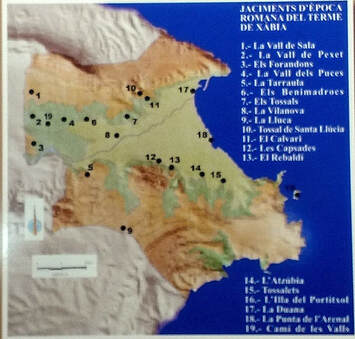 The lands which now form the municipality of Xàbia saw an important increase in the size and density of the population during Roman times. The time frame for the 19 known Roman sites began in the late 2nd century BC and lasted until the 7th century AD. The vast majority of sites are found in the area of the Sant Bertomeu valley, an area with a huge agricultural potential.

Thus the primary activity of the Roman settlements of Xàbia was agriculture. The smallholder farmers focused on the traditional Mediterranean crops of cereals, olives and especially the vine, and this continued until at least until the 3rd century AD. The wine production would have been packed in amphorae produced in workshops situated west of the valley: la Rana (Gata) and Teulera (Jesus Pobre).

Along with these small agricultural settlements are two coastal sites of considerable size: the Duana (Port) and Punta de l'Arenal, to which we could add the smallest, the island of Portitxol. The coastal locations and other features common to all three indicate that, next to agriculture, trade and fishing were important activities.