In the middle reaches of the Xaló (Jalon) river valley, between the municipalities of Lliber to the east and Benigembla to the west, there are two castles on the top of separate mountain ranges, each of which command wide visual areas. These are the castles of Pop on the Sierra del Penyó (Caballo Verde ridge) and Aixa on the Sierra de la Solana.
Aixa Castle (Xaló) occupies the top of a mountain range which is flanked to the west by the valley of Llosa and to the east by the river Gorgos. Its location at an altitude of between 605 and 595 m, emphasises its control and refuge function. It was built by the Muslims, probably in the 12th century, although after the conquest it lasted until the 14th century. Such a strategic situation explains the earlier use of this site from late prehistory through Iberian and Roman periods.

Haga clic en la imagen para ampliarlar
Few visible structures remain. There is a rectangular cistern 9.50 x 2.50 x 2.30 m, without a cover, constructed with a robust facing of pebbles and lime mortar over a metre thick, and the footings of a straight wall about 20m long that delimit the enclosure on the south side. 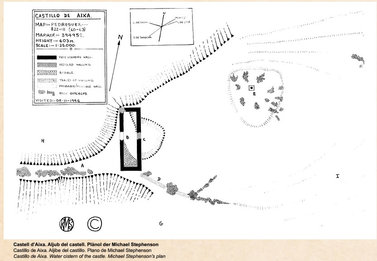 In the valley at the foot of the Caballo Verde Ridge, lies another fortification - Murla Castle. This farmstead, the only one in the Jalon Valley repopulated with Christians after the conquest by King Jaume I, retains a fortified church that was built in the 16th century, and which according to researcher S.Giner Guerri, corresponds to the actual site of the Castell de Pop